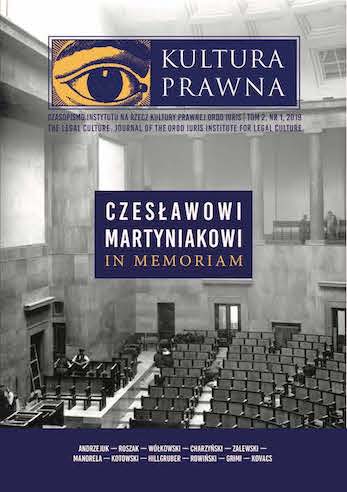 The next issue of „The Legal Culture”, a scientific journal of the Ordo Iuris Institute for Legal Culture, is devoted to the thought and work of Czesław Martyniak (1906-39), distinguished mid-war Polish philosopher of law and researcher. The texts by Polish and foreign authors published in the issue are connected with those scientific problems that were the closest ones to Czesław Martyniak.

Czesław Martniak’s scientific interests were related to some problems of philosophy of law, relation between law and morality, perceived especially in the light of St. Thomas Aquinas’ reflection on law. Martyniak was also well-known due to his Thomistic critique of the normativism, positivist-oriented Hans Kelsen’s theory.

Therefore, the papers presented in the issue are f...
More

New issue of the journal

We are pleased to announce that the new issue of "The Legal Culture" journal has been released.

All texts are fully accessible on our website: www.thelegalculture.com

We wish you a pleasant reading!

Read More Read more about New issue of the journal

Cooperation with the Ferenc Mádl Institute of Comparative Law (MFI)

We are pleased to announce that the Editorial Team of "The Legal Culture" journal has established ongoing editorial and publication cooperation with the Hungarian The Ferenc Mádl Institute of Comparative Law (MFI).

Moreover, we are honored that Dr. habil. János Ede Szilágyi, Head of the MFI, has agreed to become a member of the Scientific Board of our journal.